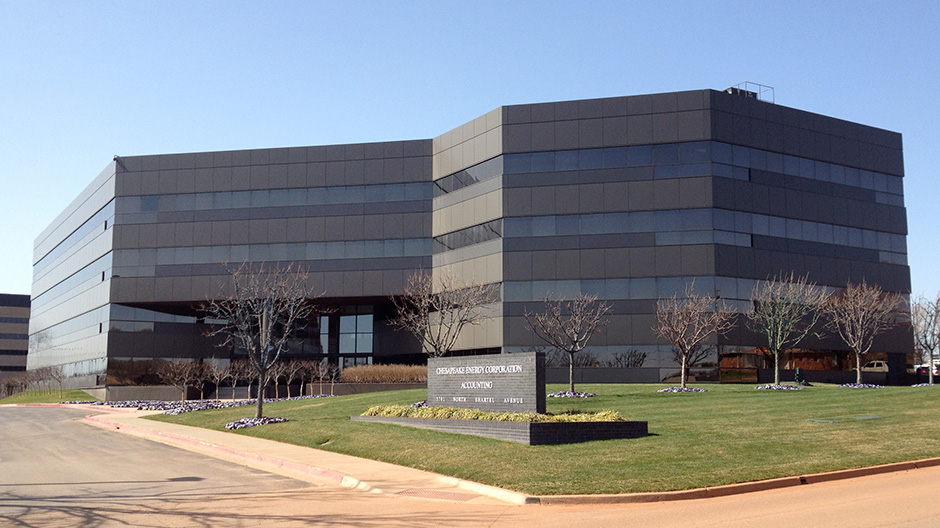 Following a severe hailstorm, Chesapeake Energy in Oklahoma City sustained extensive damage to the exterior of the building. To repair the structure without causing additional damage, fabricators at Metal Design Systems, Inc. (MDSI) needed to get creative.

Originally proposed to remove and replace the damaged panels, it was later determined that extracting the sealed cladding would compromise the integrity of the system. Additionally, due to the panels’ integration within the window system, removing the cladding without the glass did not seem feasible.

To avoid the time-consuming and costly task of attempting to install new panels into the existing system, MDSI came up with a solution – over-cladding. This meant that ALPOLIC ACM panels would be attached overtop of the existing metal panels, which would then act as an air/moisture barrier for the building. With this plan, should the building sustain future damage, each panel would be able to be individually removed and replaced. Furthermore, thanks to ALPOLIC’s custom coloring capabilities, two unique finishes were created to flawlessly match the original colors of the building.

READ OUR NEXT POST
Underground Skyscraper Serves As Preservative Architecture
POPULAR ARTICLES
ALPOLIC is a KAITEKI Company
How One Fabricator Uses ALPOLIC MCM as His Calling Card in the Residential Market
2020 Colors of the Year Celebrate Nature in Design
ALPOLIC Products Contribute to Efficient Design for Corporate Headquarters
Why is LEED Certification Important?
NEWSLETTER