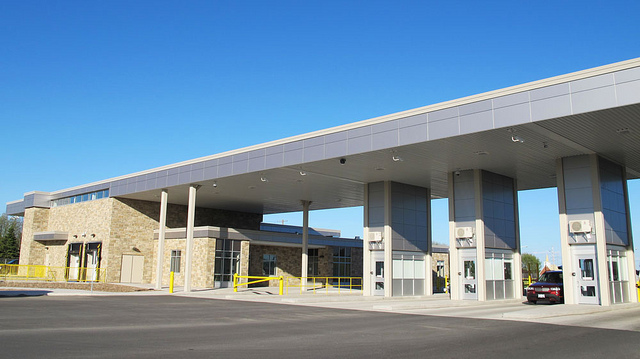 Originally constructed in 1960, Ogdensburg–Prescott Border Crossing connects the communities of Ogdensburg, New York and Johnstown, Ontario in Canada. Opened in conjunction with Ogdensburg–Prescott International Bridge, the border station served to replace the former ferry service taking motor passengers to and from the neighboring countries. According to the Bureau of Transportation Statistics, the station has reported nearly four million crossings since 2010.

Over time, the original crossing began to show signs of wear from constant traffic. In early 2012, as part of the Canadian Government’s nationwide plan to modernize all border crossings, Farrow Architects, Inc. was charged to upgrade the Ogdensburg-Prescott location to better meet the needs of the Canada Border Services Agency (CBSA). The firm looked to ALPOLIC to provide materials designed to withstand heavy use and extreme winter weather conditions of upstate New York.

The Ogdensburg-Prescott station received a new commercial building with updated facilities, two commercial processing lanes, a bigger traveler building, and a warehouse for the examination and processing of shipments. According to the CBSA, the renovation will allow for an increase in traffic flow while also ensuring the safety and security of the Canadian – U.S. border.

In addition to the upgrades in technology and infrastructure, Prescott Border Crossing also received an aesthetic makeover. Utilizing ALPOLIC/fr panels in Mica Champagne and Champagne Metallic finishes, the MCM is featured on the canopy, fascia, columns, and booth structures where motor vehicles pass.

Fabricators at Cladco Ltd., who also installed the materials, applauded ALPOLIC for “giving a very modern and sharp twist on the new border crossing facility.”

ALPOLIC creates sophisticated solutions for designers and architects across the world. We invite you to explore the many possibilities our products offer, for retail, transportation, commercial and other applications.

READ OUR NEXT POST
Volcanic Island Architecture Features Gigantic Resort Property
POPULAR ARTICLES
How Is Color Measured? Calculating Delta E
ALPOLIC MCM Reestablishes One Palliser Square on the Calgary Skyline
In Situ. How a little Latin could save you thousands on your next project.
Polyester Versus Fluoropolymer Paint in Interior or Exterior Applications
Directional Film on ALPOLIC MCM
NEWSLETTER

Order samples inspired by this article