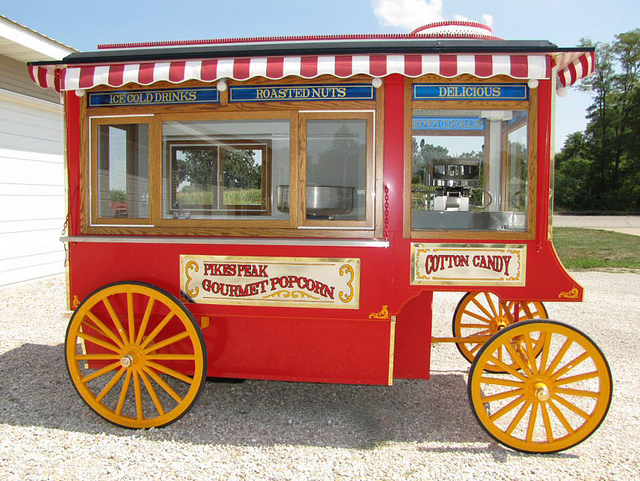 Here at ALPOLIC, we’re constantly amazed at the ever-expanding uses of our products. No longer solely considered an architectural cladding material, ALPOLIC composite panels have been featured on everything from displays and signage, to art installations and even furniture. Now, we’re proud to say that we can add yet another application to our repertoire – popcorn wagons.

The history of Pikes Peak Gourmet Popcorn began in 1925 with the opening of the Myers Dairy Co. Founded by Frank Myers and passed down through several generations, the family business received milk from area farmers to be pasteurized, bottled, or used for ice cream and other dairy products. Selling the dairy company in 1987, the Myers continued to run a soda fountain and began researching the popcorn business. Soon after, following some recipe experimentation, 15 flavors of packaged popcorn were added to the business. In 1999 - a couple moves, new owners, and a name change later – Pikes Peak Gourmet Popcorn became official. Though the original Myers business has seen several shifts in ownership and location, the products, manufacturing, and secret recipes have remained the same.

A cosmetic change for Pikes Peak came with the update of their famous Gourmet Popcorn Wagon. This early 20th century style wagon is a self-contained vending cart that can be easily operated by one, though is spacious enough for several workers. Miner Company, who has been producing the carts for approximately 20 years, stocks the carts with a 12/14 oz. popper, ample lighting and outlets, a two basin sink, stainless steel counters, and space for additional vending units.

Upon taking ownership of Miner Company, Dan Dohman determined that design material improvements were necessary. Switching from the previously used standard aluminum prefinished sheets to ALPOLIC aluminum composite panels, Miner was able to save time in fabrication and create a more rigid exterior. The ALPOLIC panels, as a result of their malleability, were able to bend to more complex box designs that were not achievable with standard sheet bending equipment. Additionally, the ALPOLIC panels allow for fewer exposed fasteners and an improved seal at the window edge – providing for an enhanced overall appearance of the popcorn wagons.