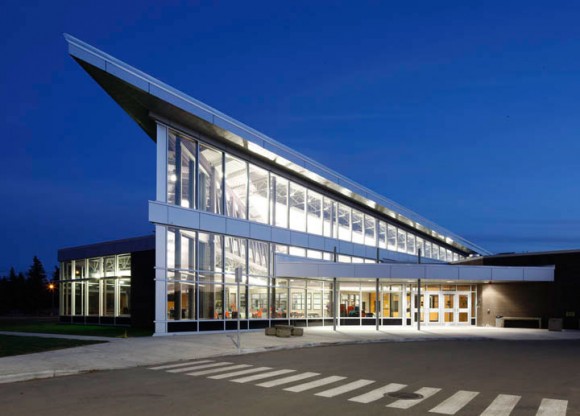 ALPOLIC aluminum composite panels are a commonly used material on educational facilities. Due to its quality and durability, ALPOLIC is able to withstand the heavy everyday use by an abundance of students, faculty, and staff throughout the school year.

In 2010, Archbishop MacDonald High School underwent extensive renovation of the facility’s 40-year-old exterior wall system. The school, which opened in 1967, is known as one of Edmonton’s top academic Catholic high schools. Furthermore, Archbishop is also ranked as one of the top ten highest performing schools in Alberta based on report card scores.

In 2005, an evaluation of the building discovered both functional and cosmetic problems throughout the school. The original exterior cavity wall system, installed back when the school was built in 1966, consisted of custom prefinished porcelain enamel metal panels. The evaluation found that in addition to leaks during rainstorms, some of the ground level panels had also been vandalized and were in need of replacement.

Based on this summary, the fabricators at Vicwest set out to modernize the existing school and address the noted maintenance problems. Chosen for its superior paint finish, flexibility, and consistent stock, ALPOLIC aluminum composite panels were installed using Vicwest’s System 3 attachment system. Thanks to the renovated building envelope, extensive improvements to both the functionality and physical quality of the facility have been achieved.

READ OUR NEXT POST
Iridescent Foil Gives Exterior Unique Color Scheme
POPULAR ARTICLES
How Is Color Measured? Calculating Delta E
ALPOLIC MCM Reestablishes One Palliser Square on the Calgary Skyline
In Situ. How a little Latin could save you thousands on your next project.
Polyester Versus Fluoropolymer Paint in Interior or Exterior Applications
Directional Film on ALPOLIC MCM
NEWSLETTER