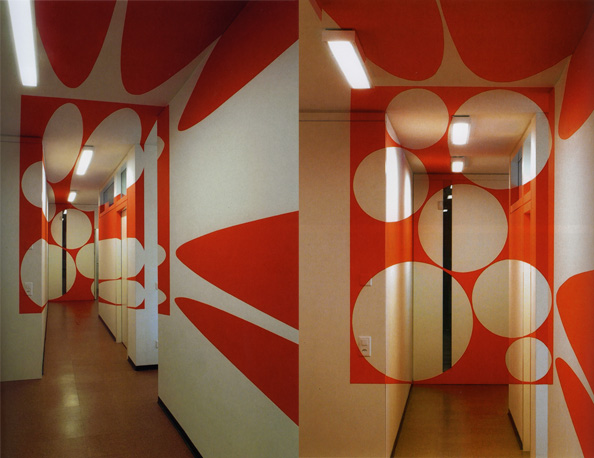 Swiss artist Felice Varini began creating vantage point paintings in 1979. The paintings vary in scale, and since the late 1970’s have developed into unparalleled masterpieces. Each of the paintings contains some geometric sequence of shapes that appear fragmented when viewed at various angles. Known as 'anamorphosis,' the paintings must be viewed at a specific vantage point for the image to be regenerated.

These localized anamorphosis paintings are applied to architectural structures on both the interior and exterior. The sizes of the pieces vary from the interior of a mall in Paris, to an entire village in Vercorin, Switzerland. Varini utilizes a projection-stencil technique, which was fully documented during his 2009 exhibition in Vercorin.

Each piece, unique in design, adds dramatic perspective and grandiose artistic interpretation to its location.

READ OUR NEXT POST
Protia Panel Displays Use GRAPHIC-AL DP Technology
POPULAR ARTICLES
How Is Color Measured? Calculating Delta E
ALPOLIC MCM Reestablishes One Palliser Square on the Calgary Skyline
In Situ. How a little Latin could save you thousands on your next project.
Polyester Versus Fluoropolymer Paint in Interior or Exterior Applications
Directional Film on ALPOLIC MCM
NEWSLETTER