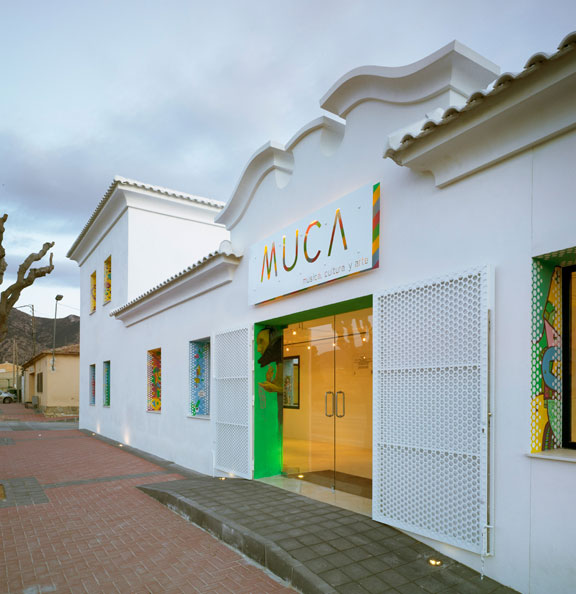 In the small village of Algueña, with a population of just two thousand residents, COR & Asociados were presented with the incredible task of creating a cultural epicenter that would promote community and urban development. With a strict budget, the architects proposed reconstructing an existing building, the old Guardia Civil quarters that had been in disuse since the 1980s. Keeping the integrity of the original structure, no formal changes on the building were made. Instead, simple cosmetic and construction techniques were initiated to return the U-shaped building to its original state. 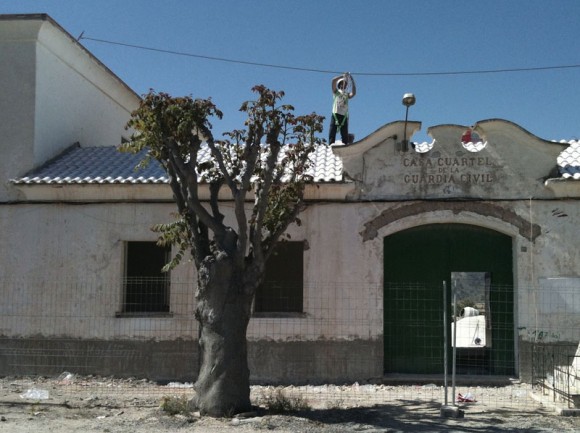 Even during the construction of this program there was an increased aggregation of the village’s artist community. Sixty local artists joined together to paint intricate designs on the jambs and lintels of each door and window of the existing building’s exterior.

As for the new construction, local politicians pushed for the creation of a landmark that would be easily recognizable as a reflection of the value of their city. Connected by stairs enclosed in fragile glass boxes, a new multipurpose hall was constructed in addition to the rehabilitation of the old Guardia Civil quarters. The exterior cladding of the new hall showcases the village’s specialty in marble production. The pearly-iridescent ceramic material that covers the façade is one of ‘perspective value’ due to its ability to change appearance based upon weather, time of day, and visual perspective.

Designed for music rehearsals and other cultural and local functions, a courtyard/open-air auditorium was built in the center of the now completely enclosed building. Now complete, the new Music House can “bring together in the same place all the activities that are spread throughout the village.”