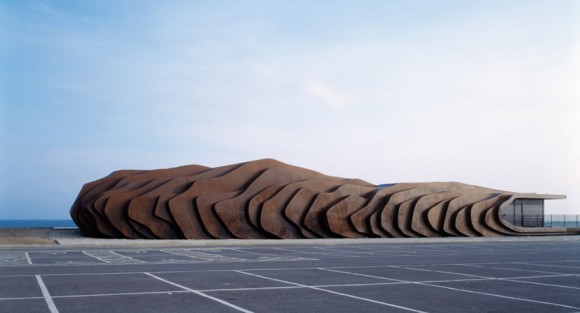 In a seaside town abutting the River Arun, Jane Wood and Sophia Murray commissioned Heatherwick Studio to reestablish their small resort kiosk into an alluring café.

The progression of the Little Hampton area began in the 18th century, when it prospered from a quaint fishing community to a flourishing tourist destination. Gaining economic success until the mid 20th century, it wasn’t until the 1970s that the area’s economy began to decline.

The group of young architects, made famous for their extravagant architectural designs, created a structure that would attract a great deal of publicity to the area.

The site’s narrow nature coupled with its exposure to harsh conditions made environmental protection an integral role in the structure’s design. The true focus rested on the project’s exterior, which was based around its protection from nature elements as well as providing a majestic view of the sea.

Using wave-like ribbons of steel, the exterior resembles ship wreckage washed up by the sea. The metal structure creates an industrial mass that complements the rustic nature of its surroundings.

According to the architects, “…the entire metal structure was fabricated by Littlehampton Welding by just two men. While the outside is raw weathered metal, the interior was sprayed with rigid insulating foam.”

Ultimately, the structure would not only spark public interest but also divide locals into those who saw it as a masterpiece, and those who did not.