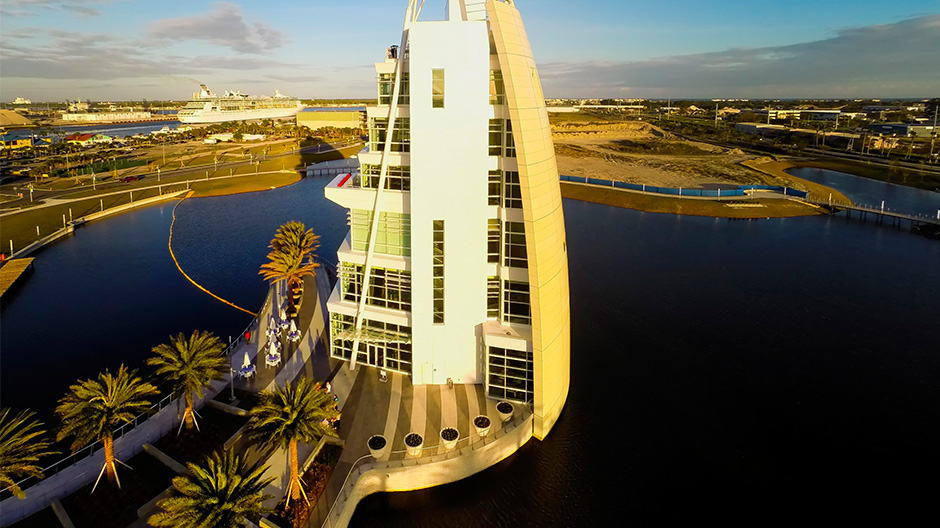 Port Canaveral, 45 miles east of Orlando on the central Florida coast, was originally dredged in the early 1950s to serve as a major cargo and naval port. A little more than ten years after its dedication on November 4, 1953, Port Canaveral began to host cruise ships as well. Today, it’s one of the world’s busiest cruise ports – hosting 4 million passengers in 2013 on cruise lines including Carnival, Disney, Norwegian and Royal Caribbean.

Current plans and projections call for doubling the port’s capacity and increasing cruise business by 50 percent over the next few years – making Port Canaveral the undisputed world leader in multi-day cruise ship embarkation. And while cruising may be the main attraction, Cape Canaveral also hosts visitors who come to enjoy the beaches, boating and fishing, camping, recreating at multiple parks, and even watching space-bound rockets take off at the nearby Air Force and NASA launch sites.

A destination that welcomes so many deserves a welcoming focal point. The new Port Canaveral Exploration tower provides exactly that. This $23 million project was designed and built on an accelerated schedule, successfully meeting the goal of opening to the public on November 4, 2013 – exactly 60 years after the original Port Canaveral dedication. The opening also marked the 500th anniversary of Ponce de Leon’s landing on the east coast of the peninsula he named “La Florida,” the flowery land.

Drawing Inspiration From – and Directing it Towards – a Remarkable Setting

Owned by the Canaveral Port Authority, this seven-story, 22,000 square-foot visitors’ center has been described by Port Authority Deputy Executive Director Tim Macy as a “great iconic building, a great vision” that draws people to “the center of the port…the center of the action that’s here.” The architect, GWWO, describes the building’s design intent as an expression of “the common characteristics – transience, function and imagery – of Brevard County’s many stories: cruising, the space coast, the military, nature, and beaches.”

As the tallest building in the area, the Exploration Tower offers stunning views of its surroundings thanks to extensive glazing and observation decks on both the fourth and seventh floors. Inside, the building offers exhibition and event spaces, an auditorium, a gift shop and a café. Educational and interactive exhibits let visitors explore the area’s history, culture and natural environment – from discovering the origins of Florida to piloting a virtual boat, from learning about the local beach culture to imagining the journey into outer space.

As impressive as the surrounding views and interior features may be, what really takes your breath away is the building’s exterior form. As the architect describes it, “The building’s dynamic form and features – sun louvers, exposed structure and iridescent skin – contribute to a constant sense of movement as the sun plays across the structure, meet functional needs, and evoke imagery of the port and county. A rocket ready to launch, a surfboard in the sand, a ship’s hull, a rocket contrail, all can be seen in the structure’s striking presence.”

The Sail Side: Inventing a Complex Geometry

Carl Ogren, project manager for Firestone Building Products, which fabricated all the exterior cladding, describes the southern elevation as the “sail side.” This façade features a steel frame that forms a complex, compound radius – in effect, an elliptical section rendered in three dimensions. Most of the sail side was clad in 1/8" aluminum panels sprayed in Sherwin-Williams’ new Kameleon™ Color mica finish, an iridescent 70% PVDF finish used for the first time ever in this one-of-a-kind project. The top portion of the steel structure protrudes beyond the cladding and converges in a point high above the top-floor observation deck.

Fabricating and installing the aluminum panels to precisely fit this complex geometry was extremely challenging – especially given the project’s tight timeframe. To meet the architect’s design and performance requirements, the fabricators and installers devised a way to take what were essentially flat, rectangular panels and form them to the compound radius of the steel structure during installation.

According to Ogren, “On a scale of one to 10, in terms of difficulty, this one was definitely off the charts.” Kenepat, the installer for the project, has described the project’s many challenges and how they were solved.

The Rest of the Building: Another Routine Project for ALPOLIC® ACM Panels

By comparison, fabricating and installing the cladding on all the other sides of the building was fairly routine. The overhanging fourth floor observation deck/canopy does have a somewhat complex geometry, but the stair towers, floor lines, elevator bump-out and other features are relatively straightforward. All these features are clad in ALPOLIC®/fr fire-resistant material.

Ogren describes the cladding system used on the non-sail sides of the building as “Our bread and butter. It’s a lot of material [12,000 square feet], but aside from the sheer scope, it’s what we do on a day-to-day basis. It’s a wet set composite system, meaning we’ve got sealant joints from panel to panel and around the entire perimeter. It’s probably our most commonly used system.”

All ALPOLIC materials used in the project were prefinished with Lumiflon® FEVE fluoropolymer resins in a Sherwin-Williams VALFON® custom white color with a clear top coat rated for costal duty. No other architectural coating offers the same combination of brightness, gloss and weatherability, making it the perfect choice for this challenging Florida location. Sherwin-Williams is our exclusive provider for this remarkably beautiful and durable finish.

Fabrication of the ALPOLIC material was all done in Firestone’s shop in Anoka, Minnesota, a suburb of Minneapolis. When asked why a fabricator in the frozen north would be chosen for a project not far from the tropics, Ogren explains, “Our customer has a really good relationship with the local ALPOLIC materials rep.” Building relationships like that is something we’re proud of.

As to why he personally likes working with ALPOLIC materials, Ogren says, “You stock a lot more selection in inventory, and from my perspective, that’s a big advantage.” Yet another reason to feel proud of what we do.

But our greatest pride is always in seeing inspired projects like the Exploration Tower come to life, bringing a transformational experience to millions of people, for generations to come.

What buildings inspire you in the way they reflect the landscape, history and culture of their setting? Browse through other inspirational ALPOLIC projects here >

READ OUR NEXT POST
The Linq: Anything is Possible
POPULAR ARTICLES
Polyester Versus Fluoropolymer Paint in Interior or Exterior Applications
Directional Film on ALPOLIC MCM
ALPOLIC is a KAITEKI Company
How One Fabricator Uses ALPOLIC MCM as His Calling Card in the Residential Market
2020 Colors of the Year Celebrate Nature in Design
NEWSLETTER