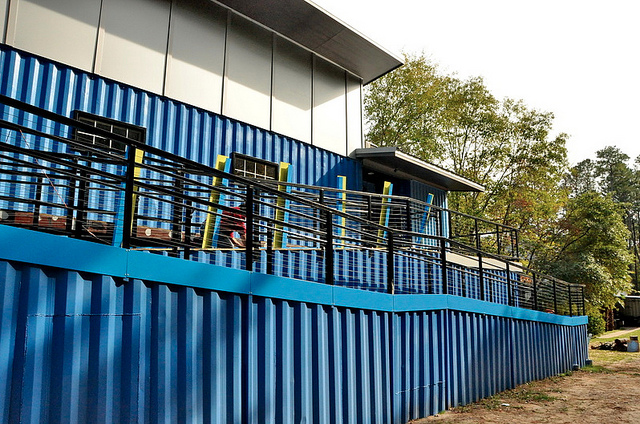 It’s a well-worn axiom of the green movement. Don’t trash if you can repurpose. But what new use can you find for a bunch of old shipping containers? A company in Texas decided they’d make great building blocks for their new video production studio. This project was so cool, we were happy to donate materials just to be a part of it.

Take 11 old shipping containers. Stack them just so. Then build a video production studio around them using the containers as the building’s core. That was the amazing concept that has since come to fruition in the form of the Creative Co-op, a new studio near Houston, Texas.

Vic Cherubini runs the company that built the Creative Co-op. As the idea began to take shape, he described the project this way: “I don’t want a building like everyone else’s. I want one that gets you excited about coming to work in the morning.”

Another one of the major goals for this project was to keep costs as low as possible. Toward that end, ALPOLIC was glad to donate the following materials, much of it from obsolete colors and product type:

For this project especially, ALPOLIC was proud to pitch in and help – from one innovator to another. 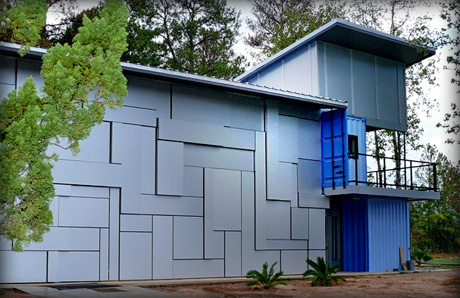 Update (November 13, 2011): Except for a few finishing touches, the project is now complete — and it stands as a great example of what can be accomplished using repurposed and environmentally friendly materials.

Called the Epic Creative Co-op, this distinctive building near Houston, Texas, is a 5,000-square-foot video production studio that prominently features donated ALPOLIC ACM panels, which fit the “green” theme because of their high sustainability.

Epic Software Group, the company behind the project, had this to say about ALPOLIC in an October Blog post:

“Remain amazed at the things you can do with ACM panels. While they were not part of our original design for the building, they have quickly become the focal point on many of the interior and exterior elements. This week we wrapped a number of exposed steel beams, and completed the ceiling of the entry …”

We congratulate Epic on their amazing project and are pleased to see ALPOLIC put to such good use.

READ OUR NEXT POST
New ALPOLIC Website Offers Interactive, Product-Based Experience
POPULAR ARTICLES
How Is Color Measured? Calculating Delta E
ALPOLIC MCM Reestablishes One Palliser Square on the Calgary Skyline
In Situ. How a little Latin could save you thousands on your next project.
Polyester Versus Fluoropolymer Paint in Interior or Exterior Applications
Directional Film on ALPOLIC MCM
NEWSLETTER