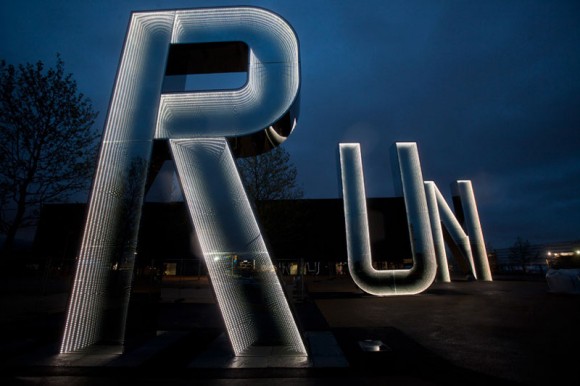 Inspired by the songs of popular music icons including Neil Young, Bruce Springsteen and the Velvet Underground, ‘RUN’ is the must-see sculpture of the ‘Art in the Park’ program for the 2012 London Olympics. World-renowned artist, Monica Bonvicini, received the commission in 2010 from the London Development Agency and the Greater London Authority to create an iconic piece for the Copper Box venue in the Olympic Park.

Bonvicini, whose pieces often reflect cultural references, created three 30-foot-tall letters forming the word 'RUN', weighing about ten tons each. Made of mirrored glass and stainless steel, the piece reflects its surroundings in the daylight. At night, an internal LED lighting system allows the sculpture to become illuminated and even more transparent.

This standalone artwork is the largest in the Olympic Park and serves as a great motivator for those participating in the 2012 Olympic Games.

READ OUR NEXT POST
Unusually Shaped Building Honors Japanese Architect Toyo Ito
POPULAR ARTICLES
How Is Color Measured? Calculating Delta E
ALPOLIC MCM Reestablishes One Palliser Square on the Calgary Skyline
In Situ. How a little Latin could save you thousands on your next project.
Polyester Versus Fluoropolymer Paint in Interior or Exterior Applications
Directional Film on ALPOLIC MCM
NEWSLETTER