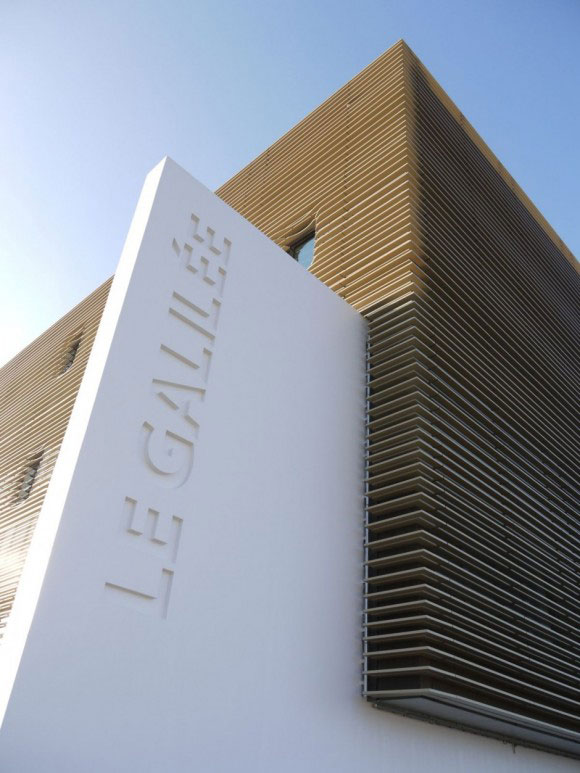 Le Galilée Office Building, by the French architectural studio Bellecour, is a debut project of the Urban Development Zone in Blagnac. Near Toulouse in France, the two featured office buildings are conjoined by a large, thick, twisted concrete mass.

The helical form of the connecting structure contrasts the aluminum wrapped buildings that it connects to with its stark white appearance.

The separated office buildings feature an intricate series of aluminum sunshades that prevent overheating in the summer but incubate during the winter. The insulated exterior material abides by the HQE (Haute Qualité Environmentale/High Environmental Quality), a French sustainability rating system similar to U.S. LEED.

In addition to the insulation properties of the facades, the project features green roofs and a basalt stone forecourt. Within the project is a large central garden, under which a car park resides.

There’s a horizontal fluidity throughout the project with the curvature of both the concrete design and the aluminum fins on the outer structures.

READ OUR NEXT POST
Composite Panels: A Contemporary Choice for Educational Facilities
POPULAR ARTICLES
How Is Color Measured? Calculating Delta E
ALPOLIC MCM Reestablishes One Palliser Square on the Calgary Skyline
In Situ. How a little Latin could save you thousands on your next project.
Polyester Versus Fluoropolymer Paint in Interior or Exterior Applications
Directional Film on ALPOLIC MCM
NEWSLETTER