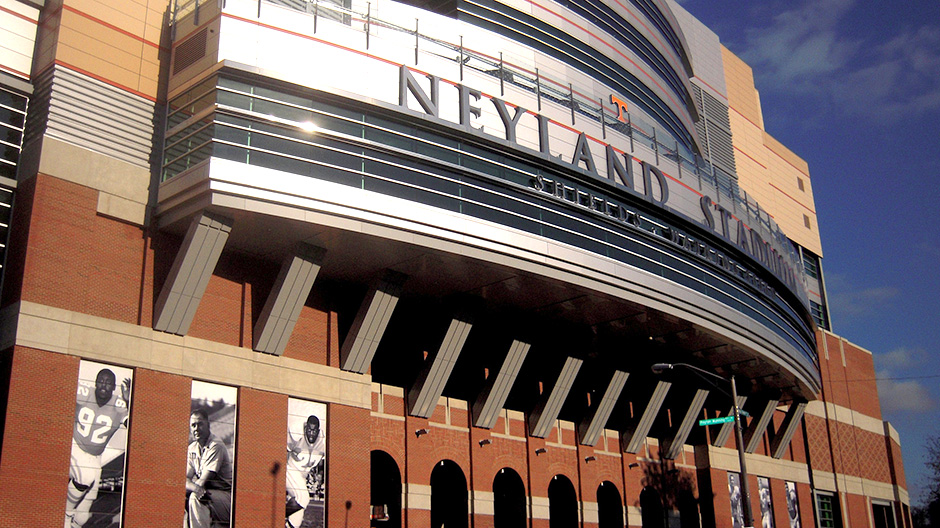 Located in Knoxville, the University of Tennessee Neyland Stadium is the official home to the Tennessee Volunteers football team. Since its construction in 1921, the stadium has undergone 16 expansion projects, making it the sixth largest non-racing stadium in the world. In 2004, the Tennessee athletics department revealed its most recent plan for the stadium - a multi-phased renovation that would once again expand and restore the iconic arena. The Neyland Stadium Master Plan, designed by McCarty Holsaple McCarty, would also employ the use of ALPOLIC materials as a means to improve both the infrastructure and aesthetic appeal of the stadium.

The first phase, completed in August 2006, included extensive renovations of the stadium’s infrastructure and north lower concourse, as well as the addition of the East Club. To help secure the aging stadium for the following years, additional support beams wrapped in ALPOLIC panels were constructed throughout the interior of the building.

The second phase, completed by the start of the 2008 season, set out to enhance the stadium’s game-day experience. In addition to renovations to the west lower concourse and Peyton Manning Locker Complex, Phase II also included the construction of the Lauricella Center for Letter Winners – yet another area of the stadium that would take advantage of ALPOLIC’s flexibility and versatility.

Phase III, finished in time for the 2010 season, would be the largest of the three. Estimated at $83 million, this phase would continue renovations to the west side of the stadium - including the lower sideline, upper deck, and tower – as well as the creation of the Tennessee Terrace and Gate 21 Plaza. Additionally, Phase III would also feature ALPOLIC in the construction of the West Club, and along the north and west exterior facades.

Thus far, the expansion project has utilized approximately 8-10,000 square feet of ALPOLIC material. As described by Stuart Butcher, architect at McCarty Holsaple McCarty, ALPOLIC was chosen for this project because of its “crisp corners, smooth dimensionally stable face, color, flexibility, [and] custom capabilities.” Upon completion of Phase III in 2010, the University of Tennessee Athletics praised the revamped stadium as an “aesthetic masterpiece.”