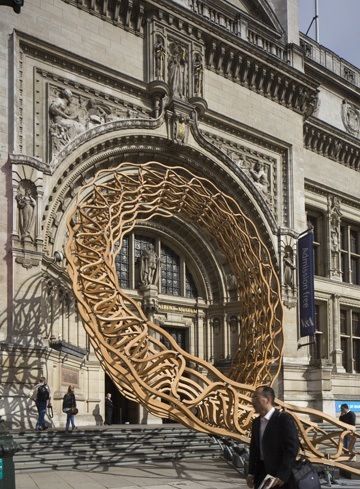 In September 2011, an astonishing 12.5m installation framed the entrance of the Victoria and Albert Museum in London. The Timber Wave, designed by Amanda Levete Architects (AL_A) for the London Design Festival, would prove to be fascinating from conception to realization. The finished product would be the result of the collaborating efforts of AL_A, Arup, and Cowley Timberwork, each company playing a critical role in the development.

With the exception of the joints of the project being made of stainless steel, the entire structure consisted of American red oak. AHEC (the American Hardwood Export Council) was responsible for convincing AL_A to do the project. Having never used this volume of wood before, AL_A stated that they were excited about the material due their fondness of working with natural elements.

The architects had a very clear vision of what they hoped to accomplish, with their main objective being to create a structure that was self-supporting. It was that factor of creating a structure that needed no support from the neighboring building that would require intense mathematics and testing.
One of the major obstacles reported by AL_A was that the entrance itself was so large it would take an equally grand structure to compete. Using “furniture-making techniques,” they created this seemingly complicated design through repetition.

Using architectural software, AL_A began exploring the idea of curving all the elements. The resulting ideas were then sent to Arup, who calculated whether the designs were structurally stable. In doing so, the project was then reworked several times before a feasible design was established.

Keeping the integrity of the original design, the pieces of timber had to be cut thinly for them to curve. Once curved, they would then need to be glued together in a process known as glulam. Cowley Timberwork, the company responsible for making and assembling the installation, had fantastic success manufacturing the structure thanks to the quality of the material.

Red oak is indigenous to the eastern United States and is said to make up around 30% of all American hardwood trees. AHEC, also responsible for donating material to the project, was enthusiastic about the project's application of red oak on account of their desire to encourage its use among designers. Due to its properties as a renewable resource and its ability to absorb carbon dioxide, AHEC believes timber is the most sustainable of construction materials.