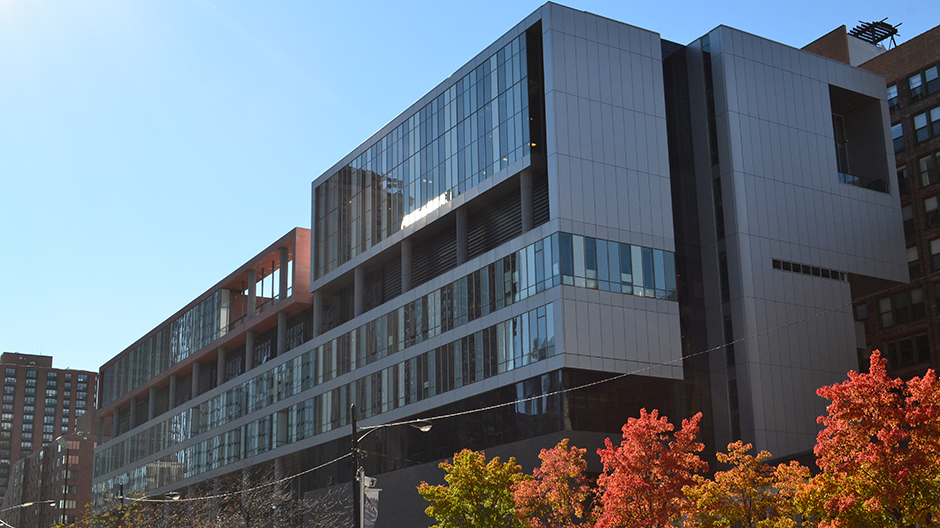 In Chicago’s South Loop, at the intersection of Balbo and State, sits a remarkable new building for remarkable young people. The new William Jones College Preparatory High School building rises dramatically just south of the school’s old location – a building from the 1960’s with a much more “institutional” aesthetic that originally served as training grounds for secretarial and office workers.

The new Jones building – with its soaring lobby, columned balconies and terraces, and stunning views of historic Grant Park, Lake Michigan, and the downtown Chicago skyline – offers a much more free and open feel than the old building. It’s an appropriate new home for a school that has grown far beyond its original purpose of training workers in an office-like environment. Named by U.S. News & World Report as one of America’s Best High Schools four years in a row, Jones Prep now has an open, engaging structure to match its mission of opening minds in preparation for a college career.

Transforming the neighborhood – and the high school experience

Designed by architects Perkins+Will, the new building was completed just last year. It’s so new that you can see it from Balbo Ave on Google Street View, then take a few “steps” toward the State St. intersection and see the hole that existed before the building was erected. It’s worth taking that virtual tour before Google gets around to updating its Street View images, because it’s a striking illustration of the difference a beautiful new building can make to the vibrancy of an older neighborhood.

At 278,000 square feet, the new building provides 1,200 Jones students with nearly twice the room for learning they had in the old facility. It’s not an unusually large size for a contemporary high school campus but, as noted by Architectural Record, it’s an unusual form that takes full advantage of its dense urban location. The building features underground parking and seven stories above grade that actually feel more like 10 or 11 stories thanks to the unusually high ceilings.

The seven floors efficiently house classrooms, laboratories, an auditorium, library, gymnasium, cafeteria and even a full-sized swimming pool – all the facilities you’d expect to find spread out over a much larger campus in a typical suburban high school. But it never feels cramped. An expansive three-story lobby, open interiors, abundant natural lighting and plenty of indoor and outdoor spaces for quiet study make for an involving, ever-changing learning environment. There’s even a landscaped roof with a rain collection system, providing a natural retreat.

Connecting a historic neighborhood with its future

On these three sides, the Jones building is designed to complement the adjacent historic neighborhood of Printer’s Row. Here, ALPOLIC® panels in a custom “silversmith” mica finish meet massive precast concrete panels in a color that emulates the red-brick construction of the buildings nearby, constructed in the late 19th and early 20th centuries. The varied forms and materials bring a new vibrancy to State Street while paying homage to the area’s rich architectural history.

According to Chad Showalter, sales manager and lead estimator at Metal Design, “Very large panels cover quite a bit of square footage,” particularly on a major wall on the west elevation. “One of the reasons we chose ALPOLIC® materials,” Showalter explains, “is that the aluminum composite material by its nature is a very flat form of metal. It makes for a very flat, smooth surface and finish to the panel. They do a very good job manufacturing their material and coming away with a very flat material.”

That quality needs to endure through the extremes of Chicago weather, year after year. Tommy Simpson, project manager at Metal Design, observes that traditional metallic materials can easily warp with changing temperatures, especially when the panels are large. Not so with ALPOLIC® materials.

“One of the reasons we liked the ALPOLIC® composite on this project,” Simpson explains, “is that we can make a panel that’s quite large and it isn’t going to ‘oil can.’ It’s not going to wrinkle. So we were able to have large panel modules that fit the different conditions for the building, both interior and exterior.”

Building for generations of learning

Decades from now, many of today’s students will likely be enrolling their own children at Jones Prep. And when they do, they’ll marvel once again at the beautiful surroundings where they took the biggest steps of their lives toward intellectual, emotional and social maturity.

With the exceptional warranty we offer on ALPOLIC® materials and finishes, we expect to be part of that legacy for a very long time. Passing down a commitment to excellence from one generation to the next – isn’t that what education is really all about?