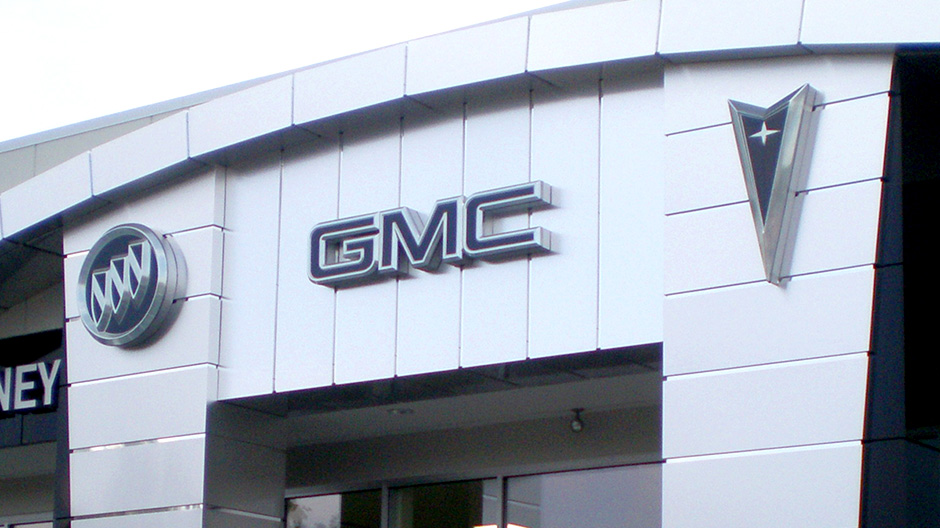 In April of this year, fabricators at Bestworth-Rommel constructed several arched entries out of ALPOLIC ACM panels to be featured at the entrances of multiple GMC Buick dealerships. As part of ALPOLIC and GMC’s nationwide program, Bestworth-Rommel internally engineered and designed the entryways in accordance with the dealerships’ intended uniform appearance.

The entry at the Lynnwood, WA location, which stands 18 ft. high by 40 ft. wide, arrived at the dealership in 3 pieces of curved ACM. The ALPOLIC panels were attached to each segment using a route and return system, and then each section was directly applied to the frame. Each arch contains several ALPOLIC finishes, including HLZ Hairline Aluminum, HPA High Polished Aluminum, TBL Black, and RVW White.

Thanks to composite material’s ease of use, fabrication of the various entries was done quickly and efficiently, one job taking as little as two hours. Additionally, as noted by the fabricators, the advantages gained specifically from the use of ALPOLIC included the exceptional service, availability, and warranty.