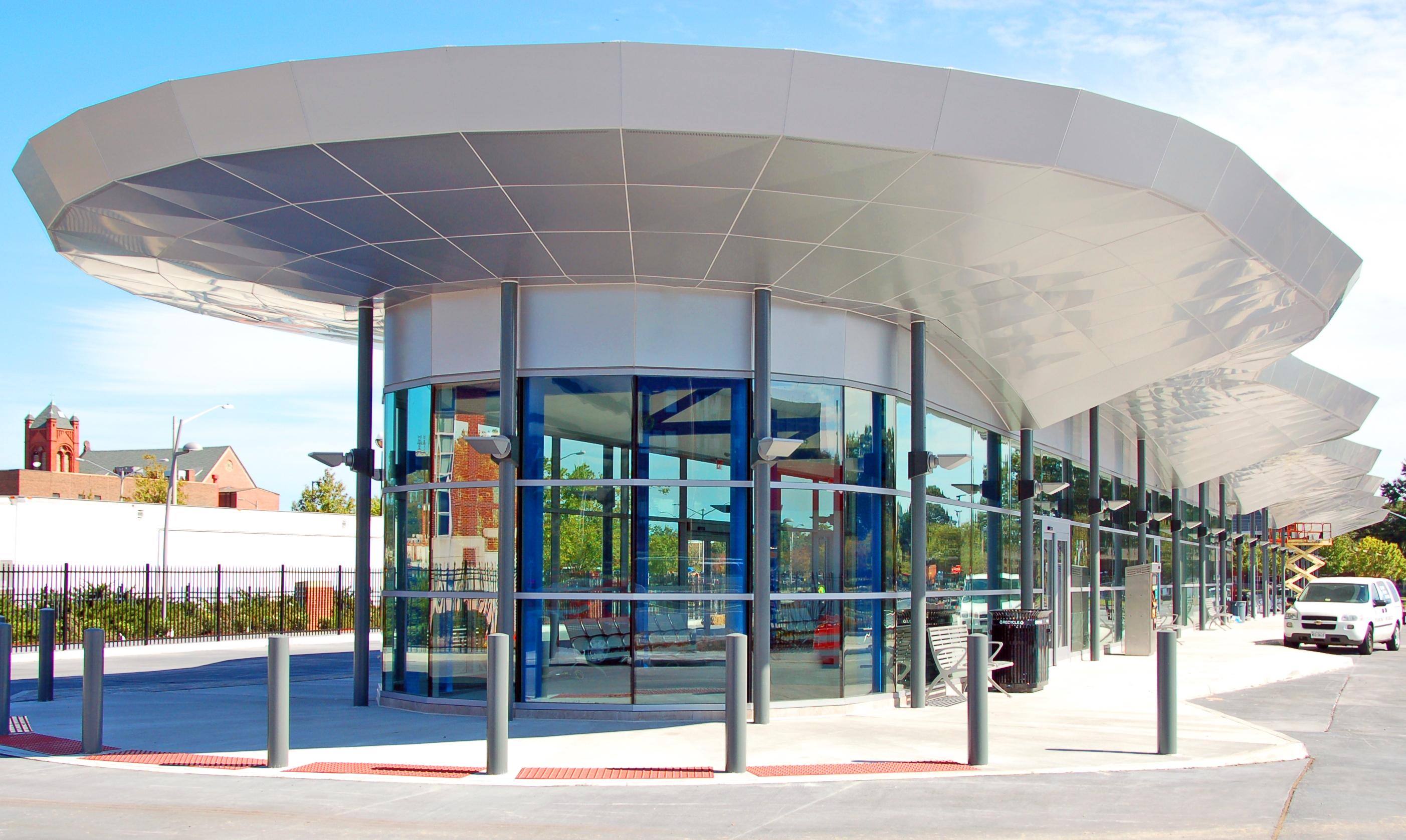 Traditionally minded people can be resistant to change when they are accustomed to a particular architectural environment. So when three concepts were presented for a new bus terminal and transfer station to serve the Downtown Norfolk area of Coastal Virginia, Michael Schnekser fully expected the public to support the most conservative option.

Schnekser, a principal at Tymoff+Moss Architects, was part of the team presenting the options at three public meetings. Hundreds of people braved the cold January weather to attend each meeting. After seeing plans ranging from traditional to visionary, they divided into focus groups to talk about their concerns and hopes for the project.

Schnekser was astounded at the support for an unfamiliar but exciting new approach to designing a transportation hub. “As an architect, particularly in Norfolk,” Schnekser says, “it really reinvigorated me. If you know the region, we’re still trying to free ourselves from the shackles of Jefferson. If it doesn’t have brick, and a pitched roof and a white column outside, then it’s not any good. It’s a very conservative region.”

By the end of the public process, Schnekser recalls, “We had 98 percent approval. To have the public respond that way was unbelievable. It was really rewarding.” Probably the reason for the public’s enthusiastic support is that the design makes sense on so many levels.

A Park-Like Setting with a Functional Design
Hampton Roads Transit (HRT) serves Norfolk and several other cities in the surrounding region. The new bus terminal and transfer station was built by the city of Norfolk and is leased to HRT. It replaces a transit hub that Schnekser describes as “literally a three acre circle of asphalt, next to a big road” – not a pleasant place to wait for your next bus, let alone just hang out and enjoy the surroundings.

The new terminal, by contrast, is designed to provide the comfort and interest of an urban park. “Boy, that would be really nice to get out of the bus on a hot day,” Schnekser explains, “and instead of being surrounded by acres of blacktop to have the shade of a tree, and a bird up above, and some bushes over there, and a bench to sit and eat my sandwich or read my book while waiting for my next bus.”

Despite the park-like atmosphere, the facility’s main purpose is to serve 14 local and express bus routes. Toward that end, the design features an oblong central island that buses can circle, pulling into several bays to pick up and drop off passengers.

One-third of the island houses a building with glazed walls that serves as an indoor waiting area. Here, blue ALPOLIC® interior panels echo the secondary color of HRT’s bus livery, welcoming riders to a convenient customer-service desk. Outside, the site’s most striking feature is a canopy of ALPOLIC® materials in HRT’s primary color of silver that surrounds the customer-service building plus the remaining two-thirds of the island devoted to park-like open space.

Providing protection from the weather for HRT customers, the canopy is designed with a series of compound arches with a sawtooth-shaped outer edge. The center is cut away to give the structure an open feel and allow sun and rain to reach the greenery planted in the middle of the island. The sawtooth “points” are spaced to cover the doorways of buses, offering continuous weather protection to passengers as they board.

Architecture by the Numbers
Kori Nichols is a project engineer at Roof Services Corporation, the firm that fabricated and installed the ALPOLIC® materials used to create the canopy as well as the customer service desk. She recalls the canopy as being an extremely complex project.

In fact, the city’s architecture review board originally didn’t believe it was possible – at least, not until Roof Services and Tymoff+Moss collaborated on a 150-pound half-scale mockup on wheels that Schnekser personally rolled down the street, onto the light rail and into a City Hall meeting room to prove the concept.

Once they had the go-ahead, Nichols and her team were responsible for transforming the CAD drawings provided by Tymoff+Moss into fabricated panels numbered to identify their position and ready to install. The design was based on dozens of fabricated panel shapes, with each shape being used in 12 different locations in a series of repeating modules.

“There were, I think, 1,010 panels,” Nichols explained. She went on to describe how she and her assistant carefully numbered each panel according to its location. Then they began the painstaking review process. “With over a thousand panels it could have been easy to skip a number. It took us two or three weeks just to double and triple-check ourselves. You’d think it’s an easy thing, but it’s not. It’s kind of nerve-racking. We had a 10-foot long plan with three sections taped together, and we hung that in the shop. As we shipped panels off, we would highlight that they were done, complete, and hung at the job site.”

A Perfect Fit – How Easy Is That?
Were there any hitches? Yes, aren’t there always? But they were so minor as to be almost comical in retrospect.

The first panels fabricated for the mockup didn’t seem to fit at all. “I had an epiphany,” Schnekser recalls. “What if we flip one of these things inside-out? So we did and it fit perfectly.” It turned out that the fabricator running the CNC machine was used to architects thinking from the outside of the building, which meant flipping the panels over before routing them. Schnekser explained, “No, we already did that for you,” and with a new set of panels routed from the other side, “We assembled the thing for 30 minutes and it was perfect.”

For her part, Nichols recalls that on the first day of the installation, “My boss said, ‘I spent four hours at the job site, and these are numbered wrong.’ I said, ‘No they’re not’.” As it turned out, “They were numbered right, they were installed right, but we just didn’t have the finished product complete on the roof. We had to put a structural gusset behind it to make a finished product. The architect said, ‘Just bend it down, and you’re good to go.’ So we did, and it was like, ‘Oh, how easy is that?’”

Surprisingly easy, given the intricacy and beauty of the results. “No one told us about ACM when we were in architecture school,” Schnekser says. But I got out of school and was introduced to it, and thought ‘Boy, this is some really cool stuff. It’s really good at being flat, it’s easy to work with, and you can do some really cool things with it.”

Working with Green Tranquility at HRT Transit Center is easy, Nichols adds. “They’re a very good company. They’re actually in our backyard... if they’ve got that material on the floor we can go pick it up within 24 hours.”

Whether building architecture or catching a bus, everyone’s happy when things run right on schedule.