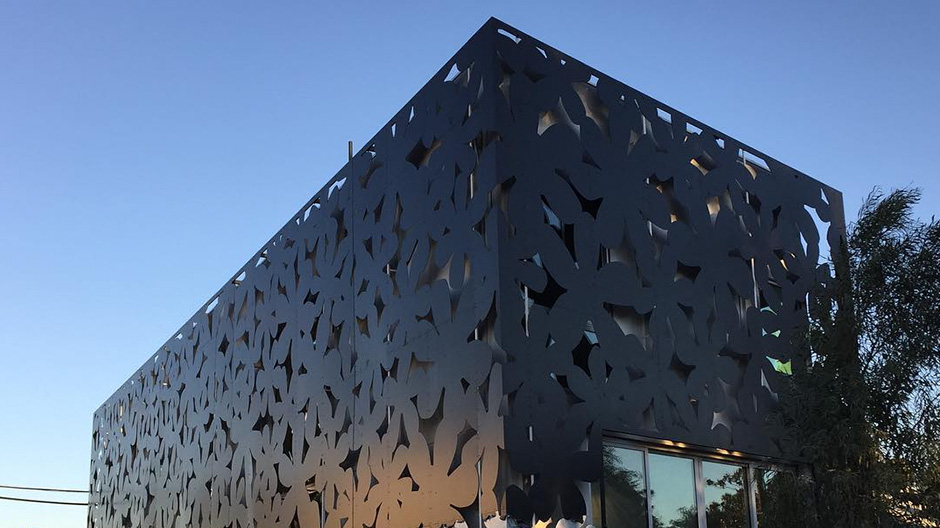 A newly completed house in Los Angeles features a unique hanging façade fabricated of ALPOLIC® materials. The Tivoli house, designed and built by Electroland LLC, is the newest addition to the firm’s extensive portfolio of projects that bring engaging architectural artworks to highly public spaces. Completed in January, 2017, the project was designed and built by Cameron McNall, founder and principal of Electroland.

The hanging façade resembles a decorative box that contains the actual house within, similar to a tissue box cover. Perforations in the façade create floral shapes with negative space that reveals the stuccoed and extensively glazed two-story inner wall. A nine-inch gap between the façade and residential structure within creates an intriguing sense of dimensionality.

Unlike most architects, McNall is also an experienced fabricator and builder. With a hands-on understanding of building materials, he enjoys exploring applications that may not be obvious when working solely with paper, CAD and BIM. “It’s not unusual to have a concept, and then I have to find a way to realize that concept,” McNall said. “And then you have a kind of funny way of loose-fitting things until they all fall into place. Sometimes in the course of building a project, you discover new possibilities and you run with it.”

For the Tivoli project, McNall challenged himself to design and attach a façade unlike any other — one that would hang independently rather than serving as cladding on the building itself. “When I started this project, I wasn’t sure what material I could use for the screen wall,” McNall said. Plastic materials were not strong enough to hang and would not withstand the sun. Solid aluminum sheet is heavy, susceptible to deformation or “oil-canning,” and would require expensive laser cutting and custom painting.

Aluminum composite material would solve all these problems, “But other ACM manufacturers I approached were hesitant to get involved for fear of litigation,“ McNall said. “A lot of manufacturers run the other way when you say you want to use their material in a different way. But ALPOLIC said, ‘Let’s make this happen. How can we help you?’”

The Tivoli project is the first time ALPOLIC® materials have been used in such an unconventional system. ACM proved to be the ideal material because it’s much lighter and more stable than aluminum sheet and can be easily fabricated into limitless shapes using CNC. The Sherwin Williams (formerly Valspar) Valflon® architectural coating eliminated any need for custom painting. “ALPOLIC® materials already have this beautiful factory finish that will last a very long time,” McNall said, “and the ability to make these flower forms without damaging it is very big deal and very cost-effective for us.”

The façade’s unusual hanging system required sign-off from the LA Department of Building and Safety. The ALPOLIC team performed the necessary testing and documentation to obtain Los Angeles Research Report (LARR) approval, which certifies that alternative materials are equivalent or better than materials specified in the building code in terms of quality, fire resistance, strength, effectiveness, durability and safety.

“Without that, we would have been dead in the water,” McNall said. “When ALPOLIC got the LARR number, that took away a lot of the anxiety about the project.” With the LARR number in hand, and by providing ample redundancies in the riveting system plus the addition of trusses for stability in high winds, McNall was able to win Building Department approval.

“Once you get past the interface of the perfect thing and the uneven reality of where it’s going, then it’s a beautiful thing to put together,” McNall said. He hopes his success will help catalyze new possibilities for material suppliers, fabricators, and permitting agencies responsible for the quality and safety of the built environment — and he hopes to inspire tomorrow’s architects to pursue their own unconventional visions.