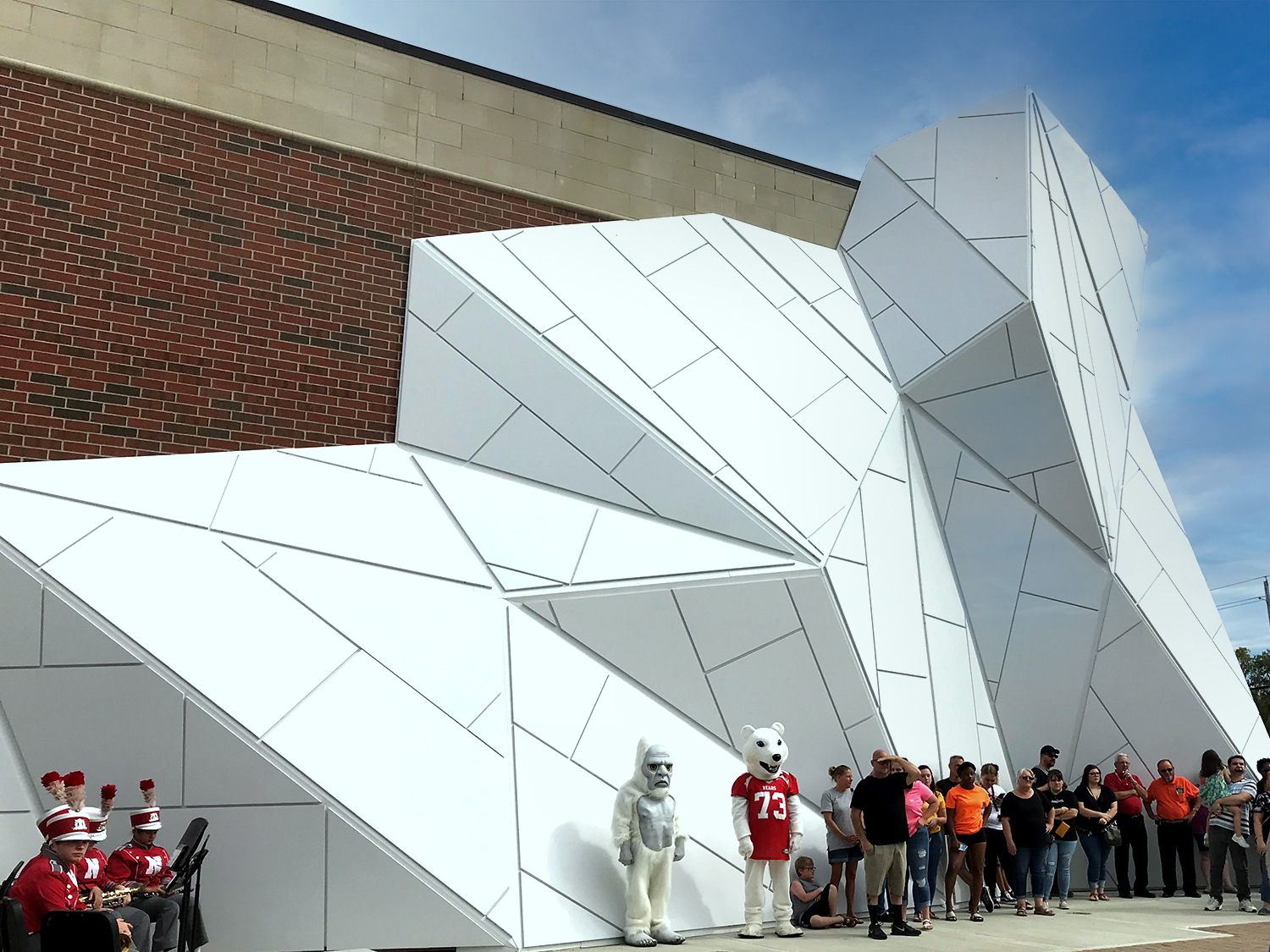 Just outside of Dayton, Ohio you can find “the best kept secret in Montgomery County,” according to the superintendent of Northridge Local Schools, David Jackson. When presented with an opportunity to renovate the K-12 school, Jackson had an idea to create a new landmark for the community. With the help of an intrepid design team and endlessly adaptable ALPOLIC metal composite materials (MCM), the finished project shines with its unique iceberg element, perfectly fitting the home of their school mascot, the polar bear.

The eye-catching feature on this 230,000 sqft campus is the work of Levin Porter Architects. CEO Mark Wiseman remembers musing, “I kinda have a crazy idea.” He wanted to create a three-dimensional focal point at the corner, one that would become a part of the building and couldn’t be value engineered out of the project. “What would you think if we stick a giant iceberg at the front?” Jackson was keen on the proposal immediately and worked to convince the school board, district and the Ohio State Commission to approve of the centerpiece concept. 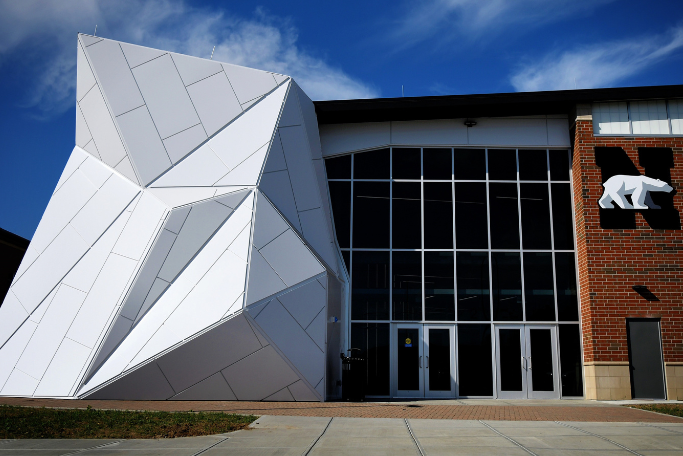 A leap of faith

Jackson visited over 15 new builds across Ohio before construction began. He knew from the onset he needed to do something different. “I wanted to create a talking point, something that makes it a destination,” Jackson asserted. Though he believed the bold concept was worth the risk, he admitted to expecting some resistance. “It was hard to envision what it would look like. Would it look like an iceberg? Could it be done within budget?”

In the offices of Levin Porter, Wiseman and his team determined the best building material to bring his vision to life. “Early on we decided to use MCM.” Composite panels from ALPOLIC were the first choice because its lustrous FEVE fluoropolymer finishes would support the dynamic design. “With that shiny reflective finish, the sunlight would naturally colorize and create greater dimensionality.” FEVE’s built-in graffiti resistance was a large selling point for the school as well. 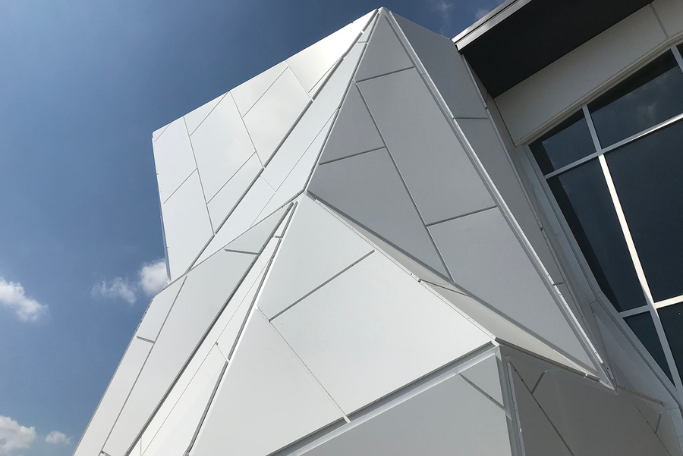 A monumental task made effortless

Wiseman took advantage of innovative technology to derive his design. “Working in 3D, it’s easy to come up with a form. But how do they build that?” His team flattened out the 3D images to create the necessary dimensions of the panels, maximizing the yield to reduce waste. They also brought out the level of detail needed for ACM fabrication and installation. Wiseman attributes much of the project’s success to these building professionals. “The contractor [Shook Construction] took the bull by the horns on their end and it went seamlessly. They knew what their system could do.”

4000 sqft of 4mm ALPOLIC PE in custom SIW white was fabricated into 243 panels by East Coast Metal Systems in their EC-200 Dry Joint Rainscreen System. Jeremiah Pleise, project manager at ECMS, found the process achievable when broken down into the smaller parts. “We used our 3D image process to gather the information to layout the panels on the structure.” Having worked with ECMS for 15 years, Pleise takes pride in his company’s reputation for tackling complex builds. “We don’t get the easy ones.”  He explained ALPOLIC was selected for its durable finish and ability to provide expedited custom color lead times.

The panels were installed by Valley Interior Systems over an intricate framing that swells over 30 feet high, cascading down the building facade and continuing into the interior of the gymnasium. Wiseman notes that not a single request for information (RFI) came through during the entire process. “How it came together was really impressive.” 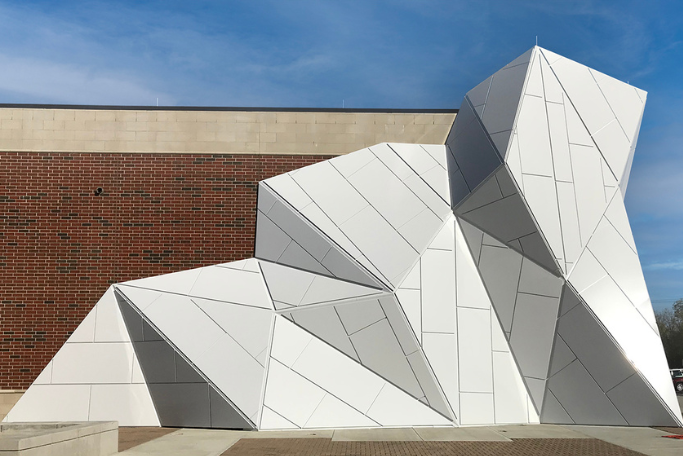 On point design, delivered under budget

“The iceberg is iridescent. It looks like ice, it’s incredible,” extols Jackson. “The materials shimmer. I never dreamed it would take on that characteristic.” Opening their doors for students in September 2019, Northridge Local Schools’ design was an instant hit with the community. Students, staff, and families are often taking pictures in front of the iceberg element. Jackson is particularly touched seeing former graduates come home with their college cap and gown for a photo. “For me, the culture pride piece was important. It’s above and beyond what I imagined.”

Wiseman was just as pleased with the result and looks forward to doing more projects like this in the future. The standout 3D element brought accolades to the design-build team. Winner of the 2021 Dayton AIA Awards in the Makers category and 2020 Metal Construction Association Chairman’s Awards in the secondary and primary education category, this new icon for Northridge Local Schools was made possible with ALPOLIC.

Superior flatness, ease of ACM fabrication and endless color options make ALPOLIC a much specified product for school campuses and other projects. ALPOLIC MCM is lightweight and durable and maintains color consistency after being bent, punched, rolled and cut into a variety of shapes. The design at Northridge Local Schools is just the “tip of the iceberg” in terms of what one can accomplish.