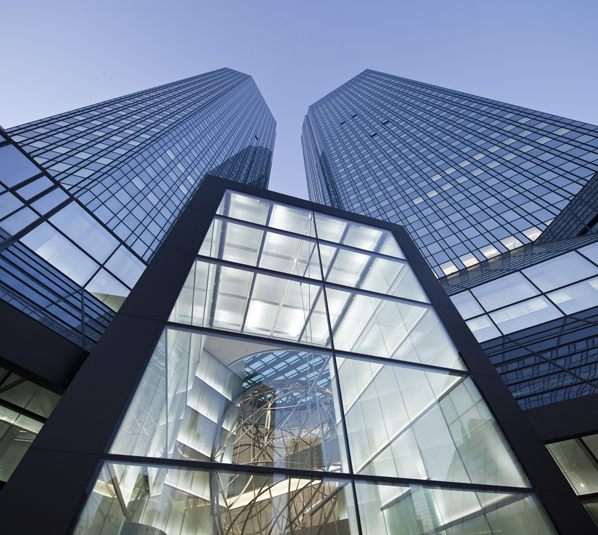 Originally constructed from 1979 to 1984, The Deutsche Bank Group’s Head Office has always been an iconic German structure. Yet according to Hermann-Josef Lamberti, Member of the Board of Managing Directors and the Group Executive Committee of Deutsche Bank, renovations to the original structure were necessary due to rapid urbanization and increased energy consumption in buildings.

In the European Union, the average amount of energy consumed by buildings is 42 percent, forcing national governments to tighten restrictions on new and renovating construction. Instead of rebuilding the 155-meter Deutsche Bank towers they chose to modernize the existing structure into one of the greenest buildings in the world.

As an iconic structure, the renovations serve as a model for a new generation in sustainable building techniques. Several of Germany’s top engineers optimized and redeveloped the building’s existing technical systems, as well as created new technologies, to achieve miraculous results. Not only was energy consumption reduced by over 50 percent, but CO2 emissions were also cut by almost 90 percent. Additionally, there was a 74 percent reduction in annual water consumption, equivalent to the amount of water used to fill 22 Olympic-sized swimming pools.

Of the over 30,000 tons of material used in the reconstruction, only two percent could not be recycled. The materials were locally sourced to reduce transportation routes, all of which were acquired within an 800-kilometer radius of the site. Known as the “Green Towers,” the new Deutsche Bank Head Office was awarded the LEED Platinum certification, the most difficult and prestigious North American certification in green building.

The firm responsible for the reconstruction was Mario Bellini Architects (MBA), whose innovative take on modernization is increasingly apparent in the interior of the structure. The focal point of the interior is a permanent installation, eloquently named—the Sphere. Bellini believes the design to be, “strong, ideally unifying everything.” Made up of random sequences of line, the Sphere has a distinct sense of organized chaos to signify the ‘restless energy produced around an idea.’ It also serves as a connector, as it wraps around the bridges that link the two towers.

We wish Frankfurt the best of luck as they enter the 2014 “Green Capital of Europe” Competition.

READ OUR NEXT POST
Mobile Coffee Platform Pushes ALPOLIC ACM's Boundaries
POPULAR ARTICLES
How Is Color Measured? Calculating Delta E
ALPOLIC MCM Reestablishes One Palliser Square on the Calgary Skyline
In Situ. How a little Latin could save you thousands on your next project.
Polyester Versus Fluoropolymer Paint in Interior or Exterior Applications
Directional Film on ALPOLIC MCM
NEWSLETTER