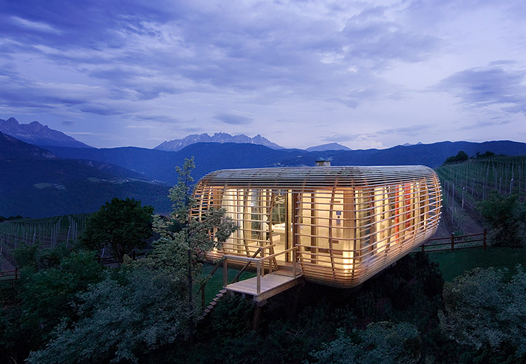 In 2003, German designer, Werner Aisslinger conceptualized a futuristic take on portable living. The idea Aisslinger coined the “Loftcube,” was soon picked up by businessman and hotelier, Josef Innerhofer. Its initial purpose was to create low-energy, affordable living spaces in urban areas. Interestingly, the very first prototype produced was housed on the roof of an urban high-rise.

Together, the initial plans were modified to introduce its potential as a means of eco-tourism. The manifestation of that design would become an eco-house with a minimal environmental footprint—the Fincube.

Handcrafted by local carpenters and craftsmen, the base of the structure is made of indigenous larch. In order to cause less damage to the earth upon construction, the structure sits 3m above ground. The Fincube is a temporary, sustainable structure that has the ability to be dismantled and recreated on a new site. With around 500 sq ft. of living space, the interior of the façade is completely enclosed in glass, allowing for a panoramic view of the surroundings. The interior was constructed with stone and Swiss pine for the natural aromas of the Alps.

Each cube is an independent unit that contains smart-function technology generated off a central touch panel system. With the ability to be reconstructed practically anywhere, the Fincube allows you to experience beautiful natural landscapes without negatively impacting them. This modern and uncomplicated structure also has the ability to be fully recycled after its use.

Although the first Fincube was created in Northern Italy in 2008, Aisslinger later went back to his “Loftcube” idea to create other incredible variations of his original design.

READ OUR NEXT POST
45 rue Louis Blanc, Paris X Program by ECDM Architectes
POPULAR ARTICLES
How Is Color Measured? Calculating Delta E
ALPOLIC MCM Reestablishes One Palliser Square on the Calgary Skyline
In Situ. How a little Latin could save you thousands on your next project.
Polyester Versus Fluoropolymer Paint in Interior or Exterior Applications
Directional Film on ALPOLIC MCM
NEWSLETTER